Before Zorro, Batman and Superman there was the Scarlet Pimpernel.
Paris, 1792.  Each day scores of the French nobility are sent to the guillotine.  They are trapped in Paris.  There is no escape.
But rumours whisper of a league of young English gentlemen of unparalleled daring who are risking their lives to spirit aristocrats across the channel.  They leave no trace behind except a note from the ‘Scarlet Pimpernel’.
The ruthless spy master Chauvelin is determined to stop the rescuers by fair means or foul and, desperately outnumbered, the Scarlet Pimpernel and his men must use all their wits to evade capture and stay alive.
With original songs, spectacular sword fights and a little bit of romance there is something for the whole family to enjoy  in this exciting and swashbuckling musical adventure. 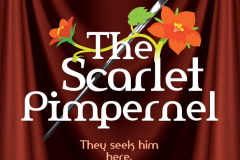 We use cookies on our website to give you the most relevant experience by remembering your preferences and repeat visits. By clicking “Accept All”, you consent to the use of ALL the cookies. However, you may visit "Cookie Settings" to provide a controlled consent.
Cookie SettingsAccept All
Manage consent

This website uses cookies to improve your experience while you navigate through the website. Out of these, the cookies that are categorized as necessary are stored on your browser as they are essential for the working of basic functionalities of the website. We also use third-party cookies that help us analyze and understand how you use this website. These cookies will be stored in your browser only with your consent. You also have the option to opt-out of these cookies. But opting out of some of these cookies may affect your browsing experience.
Necessary Always Enabled
Necessary cookies are absolutely essential for the website to function properly. These cookies ensure basic functionalities and security features of the website, anonymously.
Functional
Functional cookies help to perform certain functionalities like sharing the content of the website on social media platforms, collect feedbacks, and other third-party features.
Performance
Performance cookies are used to understand and analyze the key performance indexes of the website which helps in delivering a better user experience for the visitors.
Analytics
Analytical cookies are used to understand how visitors interact with the website. These cookies help provide information on metrics the number of visitors, bounce rate, traffic source, etc.
Advertisement
Advertisement cookies are used to provide visitors with relevant ads and marketing campaigns. These cookies track visitors across websites and collect information to provide customized ads.
Others
Other uncategorized cookies are those that are being analyzed and have not been classified into a category as yet.
SAVE & ACCEPT
Boxtree Productions